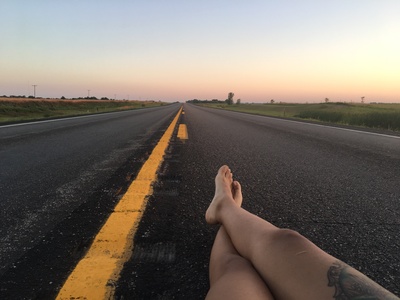 On a whim in the summer, we decided to drive to Banff National Park. Now that sounds like a nice plan. However…we are in Northern New Jersey which happens to be 48 hours away from that park.

Well, traveling across the whole United States of America is a big challenge but one we were willing to take in order to see that gatorade colored lake.

We packed our bags, shopped for all the snacks in the world, mentally prepared by researching long road trip tips(this is the longest roadtrip I’ve EVER done), and filled the gas tank to the brim.

The landscape changed every few hours. There were mysterious mountains and windy roads in Tennesee, followed by a pink and yellow sunrise we obviously stopped the car to watch. There were weird hills and giant fields of tiny yellow flowers in Canada. In North Dakota there was the longest, neverending road with ´middle of nowheré vibes. The sunrise on that road brought bright bright yellows and oranges to the horizon. The nightime on that road was scary though. At 1am we took a random exit in attempts to find a motel. We arrived at a town that only seemed to be inhabited by one small bar and a handful of half drunk men. We went into the motel and found noone except taxidermied animal heads on the walls. Although it was probably more dangerous than we realized, we slept in the weird motel’s parking lot.

We met a group on the Couchsurfer app to go hiking next to Moraine lake with. They were all either avid travelers or hikers, so I loved hearing their stories from around the globe. They wanted to climb an unmarked hiking trail that seemed much more vertical than we were experienced. It was full of tiny rocks that slid very very easily which made the hike dangerous but I couldn’t resist the challenge. We proceeded with the hike and were absolutely amazed by the view. The mountains looked like they were very skillfully drawn by the world’s greatest painter, the smell of the pine trees was enough to make it seem like Christmas in July, and the incredible color of the lake shined in the distance.

We had peanut butter and jelly sandwiches and apples on the middle of the mountain sitting on rocks. There was a moment when we had almost reached the top when my friend had a panic attack because we kept sliding and rocks kept falling. We were extremely vertical, and I began thinking about what branches to grasp onto if I fall. I was sliding on my butt and I made a mess of my yoga pants with the rocks. It was the most adrenaline and sweat I had ever produced on a hike. I loved every minute and do not regret it— even though it was definitely almost fatal(lol).

We drove to Seattle to meet our Russian friend who was visiting. With him, we hiked a steep and narrow path to a waterfall called Bridal Veils. The falls really did look like a part of a wedding day. The forest was different here, and a refreshing change of pace from the east coast foliage i’ve grown accostumed to.

Even with all the crazy moments we had, I don’t regret the trip and I would do it a million times over. The weird, scary stuff is what makes any trip better in my opinion. I wouldn’t want things to go perfect.